Erik Chambert (1902-1988) was one of the first interior designers to graduate from Högre Konstindustriella Skolan (now the University College of Arts, Crafts and Design, Konstfack) in 1925. Prior to that, he had been awarded a silver medal for his apprentice piece in cabinet-making. He and his brother, the master cabinet-maker Otto, ran the family furniture-making business AB Chamberts möbelfabrik in Norrköping, with Erik as the artistic director. The company had been founded in 1883 by their father, Axel Chambert.

As an interior designer, Erik Chambert’s first major assignment was for the Stockholm Exhibition in 1930, where he designed the functionalist interior for an apartment by the recently-appointed municipal architect of Norrköping, Kurt von Schmalensee. Gotthard Johansson expressed his opinion on Chambert’s participation in the daily paper Svenska Dagbladet: “where simplicity has not become indigent, nor functionalism dogmatic”. The senior curator for the Stockholm Exhibition, Gregor Paulsson, commented on the apartment in an appreciative letter to Erik Chambert: “As for my personal opinion, I would like to say unconditionally that I consider it to be the biggest success of the entire exhibition. It is in keeping with the spirit we wished to achieve.”

Erik Chambert designed practical, comfortable and timeless furniture in a functionalist style that gave a blond, sober impression. Helena Dahlbäck Lutteman has called the style “humane functionalism”. Study trips around Europe after his graduation acquainted Erik Chambert with the Bauhaus school and Art Concret. He was influenced by contemporary trends, but reformulated what he saw and experienced into his own personal style. For the Stockholm Exhibition he designed a folding recliner with a light wood construction and red varnished arm rests in steel. This was the only time he used this particular material that was fashionable during that period. Källemo AB in Värnamo began making replicas of the recliner and other classics by Erik Chambert in recent decades. One of these new recliners is currently standing in the library of Arkitektur- och designcentrum (earlier Arkitekturmuseet) in Stockholm. Erik Chambert believed that a piece of furniture should be functional and blend with the surroundings. A work desk with a reversible pine top, one side for work and the other for more festive occasions, with a shelf construction of wood slats underneath for paper and drawings, was shown at an exhibition in Zurich in 1949. Usually, his designs were only produced in one or very few copies. The chair “Poem” from 1953 is a rare exception.

The year before he died, Erik Chambert said, “Exhibitions have been my life.” As a furniture designer, he participated in numerous prestigious international exhibitions together with AB Chamberts möbelfabrik: Chicago in 1933, the world fairs in Brussels and Paris in 1935 and 1937 respectively, the international crafts exhibition in Berlin in 1938 and the world exhibition in New York in 1939.

Erik Chambert gave vent to his visual creativity when he designed furniture. This is evident, for instance, in the rich marquetry he made to order or for exhibitions. He took a delight in creating entire pictures, not just patterns, in marquetry, depicting figures or cityscapes in different woods. He often combined these with shimmering mother of pearl and metals. In 1945, he designed the cabinet “The Scales of Life”, now in the Nationalmuseum collection. The marquetry inlayer was Manne Manning. The cabinet was based on an eponymously titled gouache from 1943.

As an interior designer, Erik Chambert was frequently commissioned for public spaces and private homes. Most assignments were from institutions and private companies in and around Norrköping, but his clients also included Haga Palace and the Tessin Palace, through the National Board of Public Buildings. In addition to suggesting furniture and textiles, he was involved in deciding the colour schemes for walls, designing fabrics, sometimes for specific purposes, composing tapestries and a few larger curtains with appliqué work. In the book “Svenska Textilier 1890-1990” (Swedish Textiles 1890-1990), Anne-Marie Ericsson writes, “an interesting example is the furniture designer Erik Chambert, who allowed both his disciplines, as an artist and a designer, to merge in his rhythmically distinct patterns for textile prints.” Erik Chambert collaborated with Jobs Handtryck and Tabergs Yllefabrik, among others. A textile with stylised Norrköping scenes for the foyer walls of the municipal theatre in Norrköping and also the textile “Skyttlarna” was recently revived and put into production by Stadsmuseet in Norrköping. The museum also has the Chambert company’s archives in its collection.

In the 1920s and 1930s, Erik Chambert made many exquisite watercoloured sketches of furniture set in their imagined context in the furnishing of a room. As studies for cabinet embellishments, wall paintings and wallpaper he painted grass and flowers. Towards the end of the 1930s, the gouaches developed and began to feature figurative elements and organic non-figurative billowing forms. In 1943, Erik Chambert made his debut at the Liljevalchs autumn exhibition. He was subsequently represented in several exhibitions at Liljevalchs. In the 1950s, Erik Chambert painted abstracts which he initially called Compositions, followed by a number or capital letters. Bo Sylvan writes that Erik Chambert’s paintings tended towards “geometrically pruned shapes and a fastidious palette”. Up until 1959, Erik Chambert painted in gouache, but in 1960 he went over to oils.

In the mid-1960s, Erik Chambert abandoned his flat compositions and began creating reliefs in white, black or red paper or silver paper and gold foil, in a striving to achieve tension with a spatial effect. The viewer was encouraged to move in front of the work to perceive how light and shade enhanced the impression. The reliefs were built into boxes of Plexiglas, which were part of the work of art. “Lady with Dog” is an early example of this technique. The work was produced in 100 identical copies. It was included in the art society Konstfrämjandet’s exhibition “Multikonst” (Multi-Art) which was shown at 100 venues throughout Sweden simultaneously in 1967.

Erik Chambert has been regarded as a Concretist but, as Staffan Carlén points out in the foreword to the catalogue to the solo exhibition at Millesgården in 1990, “Erik Chambert did not want to label his works as Concrete, and it would therefore perhaps be more apt to speak of geometric abstraction.” His works were nearly always based on an experience or impression, such as thoughts on life, as in “The Scales of Life”, the triptych “Life Cycle” from 1963, now in Norrköpings konstmuseum, or series I-X from “A Life” or other pictures from the same, often made in connection with annual summer trips to European destinations, for instance “Les Halles” (1965), “Pointe du Raz” (1967) or “Gibraltar” (1980).

In the late 1960s, throughout the 1970s and in the early 1980s, Erik Chambert pursued his exploration of light and refraction, using only Plexiglas sheets and rods, occasionally with additions of paint to enhance the motif. In his speech at the opening of the exhibition at Millesgården, Bo Sylvan called the crystal-clear Plexiglas relief sculptures from the early 1980s “light organs”. All the Plexiglas works with their accompanying boxes were sawn, honed and joined by hand with aesthetic ingenuity. As a young cabinet-maker’s apprentice, he had learned to handle wood with great skill. Likewise, the mature artist used his inventiveness and craftsmanship to find technical solutions when working with Plexiglas. All the boxes are square, the largest measuring 1×1 metre. Erik Chambert enjoyed the challenge of achieving expansive tensions in a square.

Otto G. Carlsund and Gösta Adrian Nilsson (GAN) had links to Norrköping and Erik Chambert saw and was inspired by their art at an early age. One of the very few paintings Erik Chambert ever bought was a small gouache by GAN. Concrete art played a prominent part on the Norrköping art scene from the 1930s and onwards. The museum directors Aron Borelius, Gösta Lilja and Bo Sylvan, along with the curator Folke Lallander, enthusiastically promoted non-figurative art. Two of Erik Chambert’s most important solo exhibitions of art were shown at Norrköpings konstmuseum, in 1965 and 1981. In the 1980s, after the furniture company had been closed down, Erik Chambert devoted himself exclusively to art, and thus had the capacity to produce several solo exhibitions outside his home town. He enjoyed exhibiting at Sara Bonnier’s Galleri Bleue in Stockholm. Each exhibition of art or furniture was preceded by a series of sketches or models showing how the objects should be arranged in the exhibition space in order to achieve an exciting and varied rhythm.

Internationally, Erik Chambert made his debut as an artist at Les Surindependents Salon in Paris in 1951. In the 1950s and a couple of times in the 70s and 80s, he exhibited at Salon des Réalités Nouvelles in Paris. In 1957, he was invited to have a solo exhibition at Galerie Colette Allendy, alongside Galerie Denise René one of the leading galleries in Paris for contemporary art. Paris was vital to Erik Chambert, both for exhibiting his own works and as a source of inspiration from the contemporary art scene. Erik’s wife, Inga, who was a trained art teacher from Högre Konstindustriella Skolan in Stockholm, was an excellent support in his contacts with galleries abroad, customs offices, and so on, since she had a good command of foreign languages. She also shared her husband’s passionate interest in art, which was reflected in everything the couple did, and in their home, a house immediately behind Norrköpings konstmuseum.

Erik Chambert did not differentiate between different forms of creativity. His most recent works of art were often displayed in the shop windows with the company’s furniture. The advertisements in the local press were frequently his compositions. The slender, elegant chair “Poem” is a functional dining room chair, but also a beautiful sculpture. In Dan Gordon’s small picture of this chair, reproduced on the last page of his book “Svenska stolar och deras formgivare 1899 – 2001” (Swedish Chairs and their Designers 1899-2001), it even appears to defy gravity. There are no watertight boundaries between the designer, the creator of interiors and the visual artist. Thomas Millroth, a friend of Erik Chambert, writes, “Erik Chambert was an artist with great dedication but without fuss. Design, furniture, the company were just as important as his oeuvre as a fine artist, and he probably never had any intention of abandoning them in favour of an international career as an artist. He stood for qualitative greatness in small contexts. He, if anyone, deserves to be called an outsider or petit maître.”

Very little has been written about Erik Chambert. Helena Dahlbäck Lutteman describes him primarily as a furniture designer in her book “Erik Chambert Konstnären som möbelskapare” (Erik Chambert, the artist as furniture designer), published in connection with the exhibition “Mathsson, Chambert, Kandell, Bohlin” at Nationalmuseum in 1993. Thomas Millroth’s book ”Erik Chambert” (1993), which contains a useful list of works, deals mainly with his art but stresses that Erik Chambert’s furniture design and art were two aspects of the same creativity. Bonnie Festin, a friend of Erik Chambert, produced the film “Poem” in 1990 after his death. She attempts to convey a picture of the somewhat subdued, imaginative, quirky and constantly innovative man Erik Chambert. Creativity was an element in all that he undertook, in public or in private. A greeting to his children from one of his many trips abroad would often consist of an abstract composition. And his signature, a wood plane, was the insignia of a cabinet-maker. 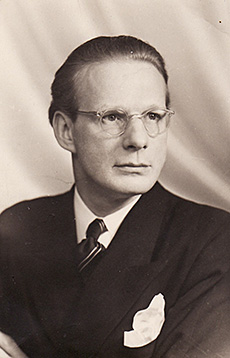 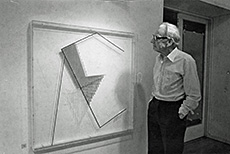 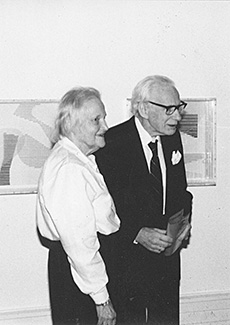 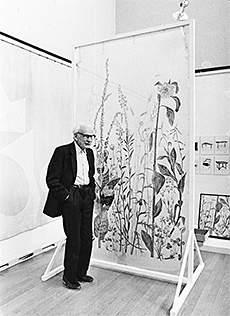 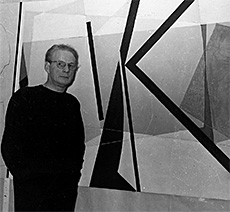 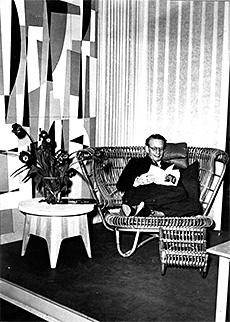 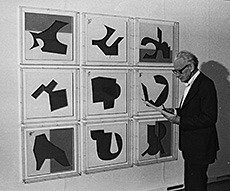 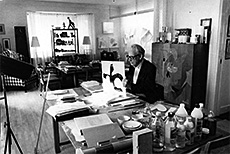 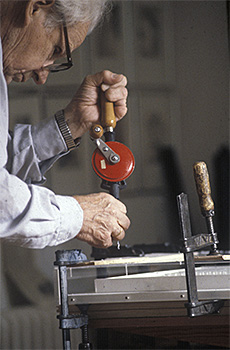 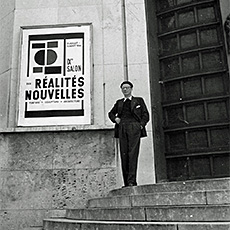 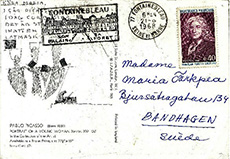 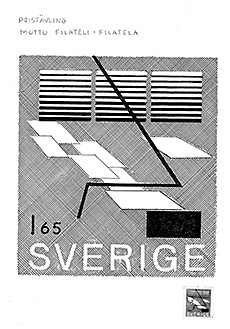